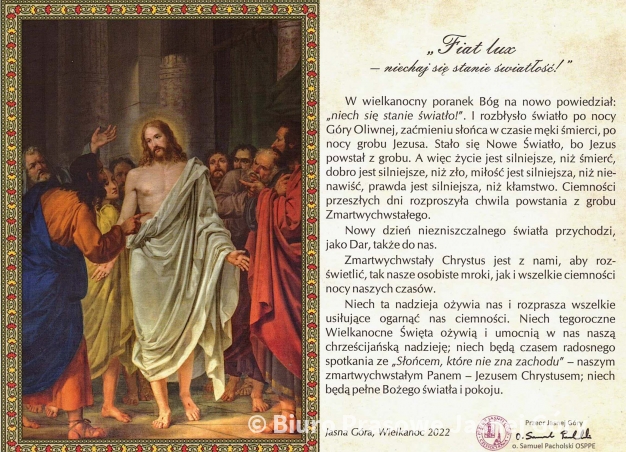 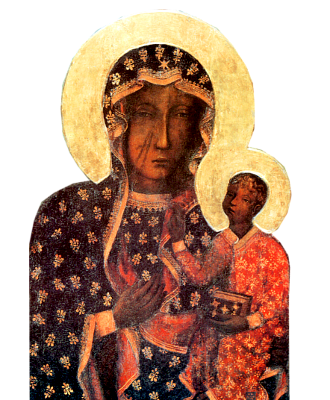 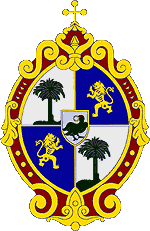 Miracolous Painting of Our Lady

THE MIRACULOUS PAINTING OF THE MOTHER OF GOD OF JASNA GÓRA

The Miraculous Image of the Mother of God is Jasna Góra’s greatest treasure. It made Jasna Góra one of the largest Marian sanctuaries in Poland already in the 15th century. However, neither the legend that holds St. Luke the Evangelist was the painter of the Icon nor Hedwige and Ladislaus Jagiello royal patronage explain why it happened so. It is not the case of apparitions, either, as there have never been any Marian apparitions at Jasna Góra. The reason for the uniqueness of this place then must lie much deeper and it seems the strength and mystery that attract pilgrims to the feet of Our Lady of Jasna Góra lies in Her presence through the Miraculous Painting. Without the Image then, Jasna Góra would only be a collection of buildings, memorabilia and works of art, perhaps a beautiful and rich, but dead museum.

The first mention of The Miraculous Image of the Mother of God can be found in Liber Beneficiorum by Jan Dlugosz: “The image of Mary, the most glorious and most venerable Virgin and Lady, Queen of the world and our Queen (…) painted in a strange and rare technique, (…) with the most admirable expression which penetrates beholders with singular piety – as if you were looking at a living person.” The Painting represents one of the iconographic depictions of Virgin Mary known as Hodegetria, which means ‘The One Showing the Way’. It portrays Mary as the Mother of God, but also the Mother of every human being.

Little is known about the beginnings of the Miraculous Image and its history until 1382. There is no certain and strictly historical information – only tradition and various pious legends according to which the Painting of our Lady of Czestochowa was painted by St. Luke the Evangelist still during the life of the Blessed Mother. The same tradition also holds the Icon was painted on a tabletop from the House of the Holy Family in Nazareth.

In the fourth century St. Helena, the mother of Emperor Constantine the Great, was to bring the Image to Constantinople. There it enjoyed great veneration and was the help particularity at times of grievous afflictions such as contagious diseases, epidemics, etc. Around the 9th or 10th century, the Icon travelled north, where it finally settled in the town of Belz, northeast of Lviv in Red Ruthenia.

In 1382 Ladislaus, Duke of Opole, who ruled in Ruthenia on behalf of the Hungarian king Louis I, decided to move the Image to his castle in Opole, Silesia region, to protect it against a possible desecration from heathen Tatar hords (tradition holds that during one of the sieges of the tower of Belz, the Blessed Virgin in the Icon was hit in the neck by a Tatar arrow that went through the window of the chapel where the Icon was placed for worship).  When on his way to Opole the Duke stopped for a short rest at Jasna Góra, Our Lady was to let him know Her will: She wanted the Miraculous Icon to stay there. Prince Ladislaus left then the Image at Jasna Góra, entrusting it to the care of Paulines, the White Monks he had invited from Hungary.

The Icon is painted on three linden boards with the following total dimensions: height: 121.8 cm (47.6 inches), width: 81.3 cm (32 inches), maximum thickness: 3.5 cm (1,37 inches). It depicts half-length standing Madonna with Child Jesus on Her arm. Mary is facing the faithful and her eyes follow them regardless of the angle they look at Her. Jesus is turned towards pilgrims but does not stop His eyes on them. On both faces there is a thoughtful look of seriousness and detachment. The right cheek of the Mother of God is marked by two vertical slashes running parallel, and the third horizontal one going across on the line of the nose. Six cuts can be traced on the neck, out of which two are visible quite clearly, while the other four less so. Jesus, clad in a carmine dress and resting on Mary’s left arm, is holding a book in his left hand, raising the right one in a characteristic gesture of a teacher, ruler or blessing. Mary’s right hand against Her breast points to Jesus, the only Savior of the world. The Virgin’s dark blue robe and mantle (maforion) are decorated with golden lilies of the Angevin dynasty. Above the forehead of the Virgin, the painter placed a six-pointed star. The background is blue and green, resembling the hue of sea water. Gilded halos around the heads of Mary and Jesus – the symbol of God the Father, are the dominant elements of the Icon. They blend into one light composition which contrasts with the dark complexion of the faces of the holy figures. For this reason the Mother of God is sometimes called the “Black Madonna.”

In 1430, during a plunder at Jasna Góra, the Chapel of the Miraculous Icon was robbed of expensive votive offerings and its greatest treasure – the Miraculous Painting. The Icon had its valuable jewelry ripped off, was slashed with swords and broken into pieces. It was found close to Jasna Góra, in a place where miraculous waters sprung and where the church of St. Barbara stands today. The monks took the damaged Icon to Krakow, to the court of King Ladislaus Jagiello who, along with his wife St. Hedwige, is the founder of the oldest part of the Chapel of Our Lady at Jasna Góra.

The restoration of the Icon was personally supervised by King Jagiello. During this meticulous process there arose numerous difficulties concerning the painting technique. The Jasna Góra Image was probably so injured that it was decided a new canvas should be placed on the board, considered a relic. The image was re-painted in keeping with the picture visible on the old damaged canvases, pieces of which were left under the new canvas. Scars on the Face of the Mother of God are a permanent vestige of the 1430 desecration of the Icon.

The scars on Our Lady’s Face are the most characteristic and recognizable feature of the Miraculous Icon and symbolically express inflicted wounds and pain. There are many of those cuts on the Image (on the neck, on the face and two under the right eye), as if Our Lady wanted to tell us that she is the Mother and Queen of Her nation martyred and tormented for centuries. And just as at the Cross we can see Her Heart pierced by the seven swords of sorrow, in the Jasna Góra Icon we look at Her Face bearing the signs of suffered pain.

The Miraculous Icon is placed in a 17c. ebony altar and has a special silver covering that shields it. It is a screen with an allegorical composition representing the Immaculate Conception of the Blessed Virgin Mary (1723). It is surrounded by a bordure founded by the Dzialynski family (1763). The screen is raised everyday at 6.00 am allowing an intimate meeting with the Blessed Virgin Mary of Jasna Góra throughout the day.

To the left of the Miraculous Icon, the altar shows royal insignia of Our Lady Queen of Poland: scepter and apple, made by a Warsaw company „Bracia Lopieńscy” and offered in 1926 by Polish women. To the right of the Painting, there is a Golden Rose and a golden votive heart with a „TOTUS TUUS” inscription, handed over by Pope John Paul II in 1979 and 1982.

Another unusual and moving votive left by John Paul II, currently displayed in a special cassette on the right side of the altar of Our Lady, is a belt of his cassock, shot and bloodied during the attempt of assassination at St. Peter Square, Vatican, on May 13, 1981.

At its very beginnings at Jasna Góra, the Miraculous Icon won fame for miracles and brought popularity to the Marian Sanctuary in Czestochowa attracting pilgrims from all over Poland, and, in subsequent centuries, from more distant European countries. Jan Dlugosz, the greatest Polish medieval historian (died 1480), wrote: “From all of Poland and neighboring countries, namely: Silesia, Moravia, Prussia and Hungary, for the solemnity of Holy Mary – whose rare and devotional painting is here – a pious people come for amazing miracles that our Lady and Advocate have done here.” The pilgrims’ faith has been richly expressed in numerous offerings to the Mother of God, offerings whose value also today should be determined primarily by the pure and lofty intentions in which they were made, and not by their price or the dignity of the donor.